Now that school is finally over and the kids are at home, how do you keep them from losing all the learning that has happened in the last year? Sure, there are lots of materials at teacher stores, but it’s pretty likely that you will get eye rolls and groans from your kids. How do you keep their skills up without it feeling like they are doing work? Here are some summer tips to increase summer learning:

Jenga with Words – The blocks on the game Jenga can have specific questions or requests. Each time a player moves a Jenga block, she reads the block and do what it says. Examples could be as simple as “What is your favorite president” or more complex such as “If you could talk to one president, who would it be and what would you ask him.”

First Person: Once upon a time there was a small village named Messyville.  It was a nice village, and it had lots of nice people in it, but it had one major problem.

Second Person: The big problem was that everyone was very messy. They never cleaned up after themselves and there was trash everywhere. But since everybody was messy, it didn’t really matter. Nobody really had a problem with it, until…

Third Person: …a new family moved in. The parent’s names were Patty and Peter Particular. Their kids were named Paul and Penny. If you haven’t figured it out yet, they were very neat and particular. During their first walk around their new neighborhood… 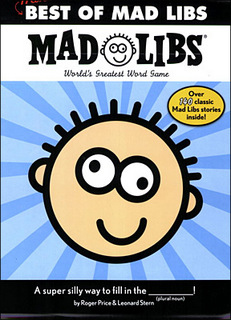 Mad Libs – This is a great, fun way to increase grammar skills of kids from about 3rd grade to adult.  Mad Libs is a series of fill-in-the blank stories. One person asks the group for the required type of word (noun, pronoun, verb, adjective, etc.) and fills in the word for the story. After all the blanks are filled, she then reads the whole story. This is lots of fun, always hilarious, and really helps with grammar skills.

Family Trip Accountant – Have one child keep a running tab of all the expenses during the trip, adding the expenses up each day. The ‘accountant’ can also separate the expenses into different categories.

Spy Family – On your next vacation, make believe that you are a spy family and have to develop a new identity and history for everyone. Spend some time answering these questions about your new spy family: Where do you live? What are your names? What skill does each person have? What is your mission? What languages do you speak?

Alphabet Games – These are the simple games families can play in the car. Try to find the letters of the alphabet on road signs or on license plates. These games are best played as a team since the younger kids will feel left out.

License Plate States – Have one child make a list of all fifty states and see how many state plates you can find during your trip. This increase geography and awareness. After each state is found, ask if the kids remember the capital of that state and add it to the list.

Keep these ideas in mind as a way to increase school skills without it looking like school!

3 Responses to "Summer Tips to Sneak In Learning Without Your Kids Knowing!"