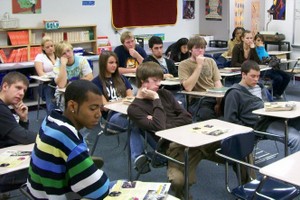 Here’s an excerpt from my book: “Homework.”  In each of the next few posts I will share information about he three top ways we can lead our children: The Supporter, The Consultant, and The Boss. This post is about being The Supporter.

The Supporter is a leader whose main goal is to support the activities of the student through encouragement, listening, and observing. As a Supporter, you understand that the best way you can increase school success is through encouragement. Either your student is doing well enough, or you know it wouldn’t be helpful to use another approach because of your child’s ambition and  sense of responsibility about self-improvement.

At first glance, you might think this approach is the least powerful, but my experience is that this approach can be very powerful if used in the right situation. It sends a very strong message to your child:
“I have confidence in you.”
“I believe you can do this.”
“I’m impressed with you.”

As the Supporter, your biggest tools are observation, listening, and reflecting.

Observing and Summing Up
I love the way that the book How To Talk So Kids Will Listen deals with the issue of observation. By observing, all we are doing is describing what we see, and then, if appropriate, summing it up in a word.
1.         What do you see?
2.         Sum it up in a word.

Let me offer a scenario and three ways you could use observation. You child has completed her homework, put her bag next to the door, and packed her lunch for the following day.

1.      I am taking at least some credit for the accomplishment. “I’m proud we got that done.”

My son and I were at a coffee shop, and a colleague I hadn’t seen for years stopped by to say hello. When I told her what I had been up to for the past decade, she said, “Wow, Neil, I am really proud of you!” I thanked her, and we talked a bit longer and then said our goodbyes. Afterward, my son asked, “Why did she say she was proud of you? Was she your teacher? Did she help you?” I told him she wasn’t my teacher but someone I had worked with ten years ago. He paused and said, “So she meant that she was impressed then, right?” My son intuitively knew the difference between the two terms.

Saying “I’m impressed” can be a much more powerful motivator than “I’m proud.” Kids want to know their parents are impressed by them—and they want to take the credit for it! In fact it’s good that they take the credit for it. It lets them know that their hard work is paying off. So next time you find yourself saying, “I’m proud,” try switching it to “I’m impressed” and see how it works.

This is another one of those simple techniques that, if used well, can be very powerful. Hit and Run Praise means pretty much just that. You praise your child, using the suggestions above, and then get out of there before it gets screwed up! As parents, it can be hard to stop ourselves from giving advice, tweaking things a bit, and fine-tuning. But sometimes those extras are the very things that spoil the soup.

You daughter has been struggling with a certain subject, getting C’s and D’s on quizzes. Today, she comes home with a B! She’s excited. So are you!

So far, so good, right? But you know what comes next…

ou add, “Now why couldn’t you have gotten B’s on the other ones?”

“So let’s figure out how you can get an A next time.”

“I hope you can keep this up for the next quiz.”

These additions can take away all of the good feelings that were happening up until then. Let’s use an example from the working world. After a great presentation, your boss says,  “Great job. Now why can’t you present that well every time?” or “Let’s look at what you can do to make it better next time.” Do you feel the wind being sucked right out of your sails? Instead, think about how it would it feel if your boss just said, “Great Job.”

To conclude, the Supporter is just supporting. You are trying to show the good progress your child is making and giving them a chance to evaluate himself. You are connecting with him and sharing in his progress without taking credit. You are setting your own ego, and your worries, aside and letting your child recognize and savor his accomplishments. The better we become at being the Supporter, the more likely our kids will stand on their own.

The Consultant is more active than the Supporter. When your role is the Consultant, you are still being the Supporter, plus you are adding information and advice when you think it will be received openly.

The art of being the Consultant is always in the delivery. Generally, success with this leadership style is based on how well the parent can deliver the message so that it will be heard. Anyone can tell someone what’s wrong. That’s easy. The hard part is telling someone what’s wrong in such a way that they will actually listen, and maybe make some changes. That’s the goal of the Consultant parenting leadership style: to deliver the advice in such a way so that it might actually be received and used!

The greatest skill of the Consultant is learning how to speak tentatively. I remember a story I heard from Bill O’Hanlon[ii], who is one of the preeminent change theorists in the field of family therapy. When Bill asked a father of five boys what his secret to parenting was, the father replied:

“Raising kids is like watching each one of them jump onto a motorcycle, get it up to full speed, and ram right into a brick wall.”

Not exactly an uplifting image, but I think we all can agree that being a parent sometimes feels that way, especially as they get older and sometimes make poor, even dangerous, decisions. But that’s not the important part of the story.

“The first kid, I didn’t even know what was happening. Surely he isn’t going slam into that wall. I was in denial. By the second kid, I knew what was ahead and screamed at him to stop. ‘Don’t you know what’s going to happen if you keep going that way?!’ But it didn’t do any good. It wasn’t until the last couple of kids that I began to understand what I needed to say was this: ‘Now I’m not exactly sure, but I have a hunch that if you keep going the way you are, at the speed you are, you might end up crashing into that brick wall. But I’m not certain.’ It was these kids that actually listened to me. They sometimes still crashed into that wall, but not nearly as often as the first few kids.”

Please keep in mind I’m using this analogy for school-related issues. If you kid was really doing something dangerous, I wouldn’t suggest the Consultant role.

The genius of being tentative lies in the fact that it allows the kid to save face. It allows the advice to be his decision, instead of it being your decision. It’s amazing how many times kids will do the opposite of the advice given, just to prove they have a mind of their own. Will your kids still make mistakes?  Sure.  But being tentative will slow things down quite a bit before hitting that wall. Plus, your relationship will be intact so that you can help them out.

For more information about being the best Supporter, check out my book: Homework – A Parent’s Guide To Helping Out Without Freaking Out!

Faber, Adele,  and Elaine Mazlish. How to Talk so Kids Will Listen. Rye, NY: Faber/Mazlish Workshops, 1996.